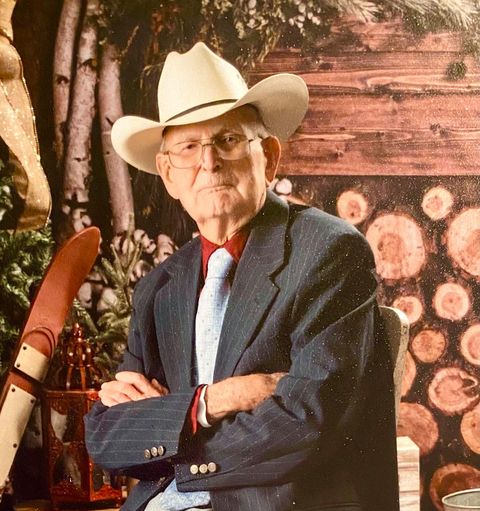 William Anderson Farley - affectionately known as “Amazing Bill” - walked into Heaven on Friday, February 26, 2021, at the incredible age of 107.

Bill was born August 17, 1913, in Muncie Bottom in Delbarton, West Virginia. He was named after William Anderson Hatfield, better known as Devil Anse Hatfield. Bill was the son of the late Thomas Farley and Polly Browning Farley. He is preceded in death by his siblings Nancy, Jesse, Mildred, Martha, Elizabeth, Landon, Okie and Lara Bell.

Bill married Thelma Wright in 1938 and they settled down in Switzer, West Virginia. He worked for Crystal Block Coal Company as a Tipple Weigh Boss until the mine closed. He then worked for Williamson Cable TV until retirement. He also had a handyman business on the side, and bred beagles.

He was an avid hunter and fisherman and loved to take his dogs up in the mountains.

He became a Christian when he was 17 years old, and was a beloved member of the Switzer Church of God.

He was a lifelong Cincinnati Reds baseball fan, and attended his first Reds baseball game with the men of the Switzer Church of God for his 100th birthday.

Bill had the honor of being the oldest registered Republican in Logan County - and he was the oldest driver in the State of West Virginia, having his driver's license renewed when he was 105.

His favorite hangouts were eating at Janet’s Park and Eat in Mud Fork or Granny Jack’s in Cow Creek.

He loved to cook and was known for his wonderful cornbread, biscuits and homemade butter. Amazing Bill was revered throughout the county and honored with annual birthday celebrations at the Switzer Church of God, as well as receiving birthday commemorations from Governor Jim Justice and Senator Joe Manchin.

He was a kind, gentle, humble, honest man with a dry sense of humor. “He was the best Daddy in the world” said his daughter Nancy Carol.

Those left to cherish his loving memories include his daughter, Nancy Carol Farley Beckett, his two grand daughters, Natasha Beckett Algeo and Natanya Beckett, his three great grandchildren, Maximilian Sabelhaus, Francesca Sabelhaus, and William Misael Garcia, Jr, his great nieces Lynn Vance and Martha Mareske, as well as many other living relatives. Visitation is Wednesday, March 3, 2021, from 11-1 pm at Collins Funeral Home in Switzer. Please wear your mask. He will be laid to rest afterwards at Highland Cemetery, alongside his beloved wife, Thelma.

To order memorial trees or send flowers to the family in memory of William Anderson "Amazing Bill" Farley, please visit our flower store.