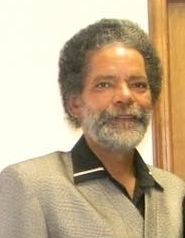 Pierre "Chubby" Elmore 62, Of Cora, was born on September 7, 1953 in Logan, WV.  As a youth he attended the Logan County Board of Education public schools.  At a time in his earlier years Chubby experienced racial injustices in his own life and learned to fight against oppression and wrong doings.  Although he was a “fighter” he possessed a gentle and caring soul and treated all those he came in contact with dignity and respect.  As a young man Chubby migrated to Providence, Rhode Island where he worked for many years at a print manufacturing company.  He became a self-taught carpenter who could build anything from a room extension, to a kitchen counter top, to a porch deck. Working with his hands to produce quality work was a passion that he oftentimes endeavored to pass on to the youth in his community.  Chubby was definitely an encourager!  Last year when Chubby fell ill he publicly acknowledged that God was real and accepted Jesus Christ as his Lord and Savior!!! Chubby was preceded in death by his mother, Doris Elmore, his father, Joseph Reynolds, Sr., 1 sister Maggie Bailey, and 3 brothers, Chester, Melvin & Andrew Reynolds, Sr. Chubby leaves to cherish his memory 3 sons, Pierre (Tekia) Sherod, Justin Barboza, and David Sherod and 2 daughters Stephanie Sherod and Joy Rose. 12 grandchildren:  Gage, Gregory, Jahnai, James, Jamuro, Micayla, Michael, Precious, Shawn, Sierra, Westley, Zayden, and 1 great grandchild, Kerry Jacob. He also leaves to cherish his memory:  ex-wife, best friend and caregiver Sandra (Doll) Sherod, devoted sister-in-law and also caregiver Mary Reynolds, special friend and care-giver Kim Sherod and a host of nieces, nephews, in-laws, cousins and friends. Chubby is survived by siblings Joseph (Eleanor) Reynolds and Walter (Doris) Elmore, Jr. of Logan, WV and Jessie Francis Murrell of Columbus, Ohio, Essie Hector of Fredericksburg, VA and Doris Hector of Providence, Rhode Island.  Services will be 3:00 P.M. Saturday, July 30, 2016 at The Original Glorious Church of God @ Whitman, WV with Pastor Brandi Slaughter officiating.  Visitation will be one hour prior at the Church. Collins Funeral Home of Switzer is in charge of the arrangements.  Condolences may be left @ www.collinsfuneralhomewv.com./

To order memorial trees or send flowers to the family in memory of Pierre Elmore, please visit our flower store.