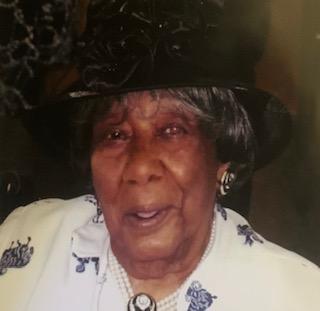 Mary Magdaline Hamilton Brown changed her address at 10:25 a.m. on  December 11, 2019.  Quietly, she moved from her old residence to her brand new home beyond the sky for her Lord and Savior, Jesus Christ, called her to Him.  When Mary Brown arrived on earth, she did not come to stay.  She planned to visit for a little time, make some friends, have a family, get to know relatives and acquaintances, and work for a little while.  Mary Brown had no idea that her Lord and Savior, Jesus Christ, would bless her with 110 years on earth.

Born to Weldon and Josie Hamilton in Bostic, North Carolina on July 4,

1909, Mary Brown was the fifth of seven children.  Her parents had five daughters

At the age of nine, Mary Hamilton Brown and her family moved to Holden,

West Virginia. They lived with family members there.  She attended the old

Dunbar Elementary School at Holden.  When she was in the eighth grade, her

The following are left to memorialize Sister Brown: grandchildren

Dear to her are one goddaughter, Debra Hancock Howard of Detroit, Michigan, Shelia Gray of North Carolina, and Loretta Miller of Atlanta, Georgia.

Walter, her husband of seventy-five years, preceded her in death.  Departing this life before Mary Brown were her children Cleona Milburn, Bernard Brown, and Margaret Brown; a granddaughter Donna Brown; and two great grandsons Alex Brown and Jermaine Brown.

When Sister Brown returned to Mount 0livet Missionary Baptist Church she was a member of the choir, the mission circle, and the willing worker circle. Also she was a youth matron, kitchen aid worker, and The Mother of the Church.

Other organizations that she belonged to were the Guyan Valley Women’s Choir, the Chief Cornstalk Council as a scout leader, and the Order of the Eastern Star, StarLight Chapter #40.

For many years, Mary Brown worked for the Logan County Board of

Education as a cook at the old Buffalo Elementary School.  After leaving that

position, she worked for Outreach at PRIDE in Logan County.

Today she leaves a host of relatives and friends saying good-bye.

A service will be held on Saturday, December 21, 2019 at Mount Olivet Missionary Baptist Church beginning at 12:00P.M. with a visitation one hour prior. There will be a dinner directly after the services at the church, and burial will follow at Forest Lawn Cemetery. In lieu of flowers, the family ask that donations be made to the church or the American Cancer Society. Collins Funeral Home of Switzer is assisting the family with the arrangements. Condolences may be left at www.collinsfuneralhomewv.com

To order memorial trees or send flowers to the family in memory of Mary Brown, please visit our flower store.