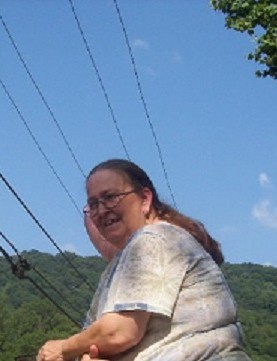 Donna Elizabeth Bragg, 60 of Omar departed this life Tuesday, August 04, 2015 in CAMC Memorial Division Hospital in Charleston. She was born November 29, 1954 in Logan to the late Don and Mercie (Blankenship) Ellis.  She was a homemaker and of the Baptist Faith.  In addition to her parents she is also preceded in death by her grandparents; Silas & Grace Elizabeth Browning Blankenship and John C. & Erna O’Daniel Ellis, two brothers; Larry Ellis and Don Jr. that died at birth, three sisters; Lois Conn, Judy Amidon and Marcella that died at age two.  Those left to cherish her memories are her husband; Don Bragg of Omar, one Son Greg (Melinda) Ellis of Omar, one daughter; Misty Williamson, one brother; Billy Ellis of Whitman, three sisters; Evelyn (Bill) Ramey of Wilkinson, Sandy (Dutch) Colley of Omar and Tammy Ellis of KY, four grandchildren; Taylor Dawn and Chase Ellis, Kaylea and Nikolas “Jax” Williamson and a host of nieces and nephews.   A Memorial service will be held in her honor from 6 to 9 PM Friday, August 07, 2015 at Collins Funeral Home Chapel in Switzer.    Her wishes were to be cremated.  Condolences may be left at www.collinsfuneralhomewv.com.

To order memorial trees or send flowers to the family in memory of Donna Elizabeth Bragg, please visit our flower store.