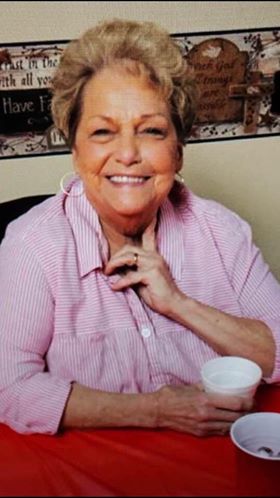 Christine Davis Dameron, 76 of Barnabus made her trip to her heavenly home on Thursday December 6th, 2018 at Logan Regional Medical Center after a brief illness. She was the daughter of Giles and Dolly Bradley Davis of Rossmore. In addition to her parents, she was preceded in death by her soul mate, Rev. Mansfield Dameron, Two brothers; Lynn and Bill Davis. Four sisters; Lorraine Davis, Virginia Davis, Maxine Capua, and Betty Vance whom was her best friend. Two Nephews; Ronnie and Donnie Vance. Two Nieces; Debbie Capua and Jacqueline Davis Atkins.

Christine was a devoted wife, mother, and grandmother above all. Her love for her family was a love that knew no bounds. Christine and Mansfield had a marriage much like a fairytale. They set a wonderful example for what a marriage should be for anyone who knew them. Christine was a homemaker, a caretaker, and a cook for the Logan County Board of education. She had a servants heart and yearned to take care of people. She was a member of New Life Freewill Baptist where her husband pastored until the time of his passing.

Christine is survived by her; Her three children; Hope (Rev. Walter) Gore of Madison, Faith (Dewey) Conn who she resided with in Barnabus, and Rev. Mansfield Matthew (Debbie) Dameron II of Omar. Seven Grandchildren whom she adored; Robbie (Beth) and Jared (Kristyn) Gore of Madison, Morgan, Chance, and Rylee Conn of Barnabus, Sarah and Presley Dameron of Omar. One great-grandson Jacob. Her Loving Sister, Jo Hileman of Barnabus. A special Niece, Katrina Collins whom she loved like her own, and Adam Wooten who was like a grandson to her. As well as a host of loving, nieces and nephews.

Upon her request, there will be no service. In lieu of flowers, donations can be made to New Life Freewill Baptist Church. Collins Funeral Home of Switzer is assisting the family.

To order memorial trees or send flowers to the family in memory of Christine Dameron, please visit our flower store.