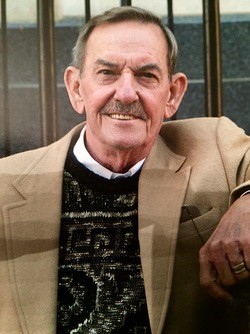 Bill G Davis, of Williamson, born Aug 12, 1936 in Logan County WV, a son of the late Giles and Dolly Davis, went to be with his Lord on Jan. 23, 2015.
Bill was an active member of First Baptist Church of Williamson where he served in multiple capacities over the last several years. He served as a deacon, was a member of the choir and served at the pleasure of the pastor. He married his loving wife of 56 years, Doris Maynard Davis, on Dec, 25, 1958. He served in the US Army for five years and was stationed at Fort Knox Kentucky until his honorable discharge in 1962.
Bill and Doris have six children. Their eldest child, Stephen Gregory, preceded his father in death. Their second child, Beverly Christine, is married to David Allen Farmer of Logan, they have two sons, Jordan Clarence Farmer and Austin Taylor Farmer; Jacqueline Denise married Kenneth Atkins, they have three children, Christopher Ryan Atkins, Kaitlyn Elissa Atkins and Kendyle Elizabeth Atkins of Williamson; Jennifer Dawn is married to Dr. Samuel Brown, they have three children, Lauren Brooke Brown, Mason Davis Brown and Rileigh Madeline Brown of Jacksonville, FL. Their son, Kevin Michael Davis, is married to Holly Gail Davis of Louisville, KY; together have three children, Hanna Gail Davis, Aidan Michael Davis, and Stephen Gregory Davis. Their youngest child, Catherine Sue Cole, is married to Ronald Cole of Pilot Mountain, NC; they have three children Gavin Ross Cole, Autumn Elizabeth Vernon and Joshua Scott Vernon (son-in-law). Bill also has five siblings, two of whom preceded him in death, a sister, Maxine Copua and a brother, Lyne Davis. He is survived by siblings Jo Hileman, Christine Damron and Betty Vance. Bill has a host of family and friends whom he dearly loved.
Bill retired for the Mingo County Commission where he had served as Floodplain Coordinator. He enjoyed golfing with his son and sons-in-law. He was an avid Williamson Wolfpack fan and enjoyed supporting the Pack both at home and away. He won the post bantamweight WV Golden Globes title as a young man as well as the light weight title while stationed at Fort Knox KY.
Bill had a servant’s heart and will be missed in his community among his family and friends. Bill was known for his willingness to help wherever and whenever he was needed. Never was this more evident than during the 1984 flood in Williamson. He was instrumental in finding aid for many displaced families. He will be sorely missed.
Visitation is from 6:00 pm to 9:00 pm, Sunday evening, January 25, 2015, at Weaver Mortuary in West Williamson.
Funeral services will be conducted at 1:00 pm, Monday, January 26, 2015, at the First Baptist Church of Williamson. The body will lie in state at the church for one hour prior to the service. The Reverend Jarrod Belcher will officiate.
Interment is in the Mountain View Memory Gardens at Huddy, KY. Family members will serve as pallbearers. Members of the Board of Deacons and Board of Trustees of the First Baptist Church of Williamson will serve as honorary pallbearers. Military rites will be presented by the Disabled American Veterans, Chapter 141, Belfry, KY.
You may express online condolences at www.weavermortuaryinc.com.
Weaver Mortuary of West Williamson is serving the Davis family.


To order memorial trees or send flowers to the family in memory of Bill G Davis, please visit our flower store.